Katz's Tough Guise series is considered a classic in the media literacy field.

Jackson Katz is the creator, lead writer and narrator of the groundbreaking and award-winning Tough Guise documentary series about American manhood, media and violence, produced by the Massachusetts-based Media Education Foundation.

His work in gender violence prevention education is featured in the 2018 video The Bystander Moment: Transforming Rape Culture at its Roots.

Katz is also the creator of the 2020 film The Man Card: White Male Identity Politics from Nixon to Trump.

Trailer for The Bystander Moment 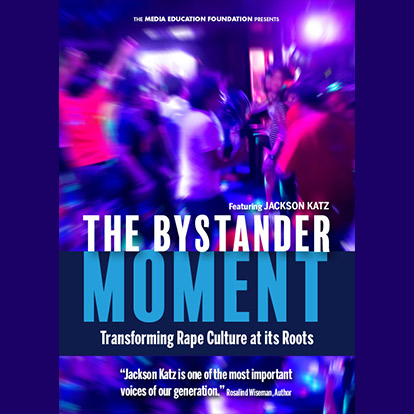 The #MeToo movement has shined much-needed light on the pervasiveness of sexual harassment and abuse and created unprecedented demand for gender violence prevention models that actually work. The Bystander Moment tells the story of one of the most prominent and proven of these models – the innovative bystander approach developed by pioneering activist and writer Jackson Katz and his colleagues. In a riveting analysis illustrated with archival footage and clips from news, sports, and entertainment media, Katz explores the role of bystanders—especially friends, teammates, classmates, and co-workers—in perpetuating sexual harassment, sexual assault, and other forms of gender violence. Katz also gives special attention to the peer culture dynamics – in particular the male peer culture dynamics across race and ethnicity — that help to normalize sexism and misogyny while silencing other men in the face of abuse. Along the way, The Bystander Moment stresses the crucial importance of appealing to people not as potential perpetrators or passive spectators, but as active bystanders and potential leaders who have a positive role to play in challenging and changing the sexist cultural norms that too often lead to gender violence. The result is an indispensable educational tool in the ongoing struggle to prevent sexism and misogyny and promote gender equality.

In this highly anticipated update of the influential and widely acclaimed Tough Guise (2000), pioneering anti-violence educator and cultural theorist Jackson Katz argues that the ongoing epidemic of men’s violence in America is rooted in our inability as a society to move beyond outmoded ideals of manhood.

In a sweeping analysis that cuts across racial, ethnic, and class lines, Katz examines mass shootings, day-to-day gun violence, violence against women, bullying, gay-bashing, and American militarism against the backdrop of a culture that has normalized violent and regressive forms of masculinity in the face of challenges to traditional male power and authority.

Along the way, the film provides a stunning look at the violent, sexist, and homophobic messages boys and young men routinely receive from virtually every corner of the culture, from television, movies, video games, and advertising to pornography, the sports culture, and U.S. political culture.

Tough Guise 2 stands to empower a new generation of young men — and women — to challenge the myth that being a real man means putting up a false front and engaging in violent and self-destructive behavior. 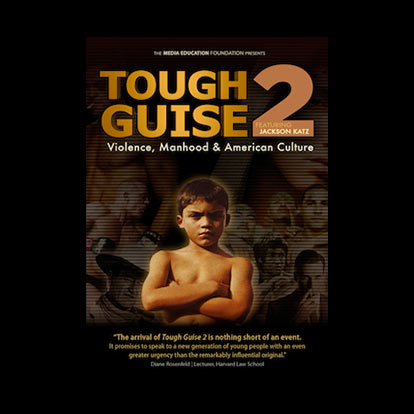 “Tough Guise gave an entire generation of students the most engaging and insightful critique of contemporary masculinity they’d ever seen….It remains the touchstone work for all cinematic efforts to map the obvious and subtle links between masculinity and violence.”

“By combining critical media analysis with feminist theory, Jackson Katz brings his unique insights and cutting-edge perspective to an exploration of the ways contemporary masculinity is shaped and constructed by pop culture. This documentary is obligatory viewing for teachers, students, practitioners, and activists concerned about the epidemic of male violence.”

“I was sure Tough Guise 2 could not possibly outdo the original. I was wrong. This updated version featuring Jackson Katz is a brave, thoroughly and graphically documented indictment of a society that promotes the glorification of male violence…. I challenge all men, especially fathers, to watch Tough Guise 2. And to take personal responsibility for helping to reshape the ‘American Ideal’ of manhood.”

Norm Stamper | Former Chief of the Seattle Police Force | Author of Breaking Rank: A Top Cop’s Expose of the Dark Side of American Policing

“In his latest film, Tough Guise 2, Jackson Katz helps us understand the violence men do to themselves and to others, and he does that more compellingly and vividly than has ever been done before. Tough Guise 2 is more powerful than any argument, more real than any theory, and more urgent than today’s news. This is a documentary that is as entertaining as it is brilliantly insightful. It is essential viewing for anyone who cares about men, women, or children.”

Tom Digby | Professor of Philosophy at Springfield College | Author of Love and War: How Militarism Shapes Sexuality and Romance

“Tough Guise 2 is a riveting and transformative film that will open the eyes and alter the lives of a new generation. Watching Tough Guise 2 will be a breakthrough moment for many viewers since it stands as the liberation film for boys and men. This is an indispensable documentary for parents, anti-violence advocates, educators, and students across the country.”

“The arrival of Tough Guise 2 is nothing short of an event. It promises to speak to a new generation of young people with even greater urgency than the remarkably influential original.”

Tough Guise: Violence, Media, and the Crisis in Masculinity (2000) 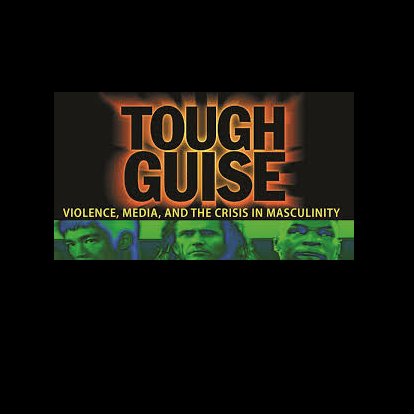 Now considered a classic of educational documentary and critical media literacy, Tough Guise was the first educational video geared toward college and high school students to systematically examine the relationship between pop-cultural imagery and the social construction of masculine identities in the U.S. at the dawn of the 21st century.

In this innovative and wide-ranging analysis, Jackson Katz argued that widespread violence in American society, including the tragic school shootings in Columbine, Jonesboro, Arkansas, and elsewhere, needed to be understood as part of an ongoing crisis in masculinity.

Utilizing racially diverse subject matter and examples, this groundbreaking media literacy tool has enlightened and provoked a generation of students (both males and females) to evaluate their own participation in the culture of contemporary masculinity.

Tough Guise was named one of the Top Ten Young Adult Videos for 2000 by the American Library Association. It quickly became a staple in college communication, sociology, gender studies, psychology, criminology and linguistics courses, as well as numerous high school courses. It has regularly been used by educators in the battered women’s and rape crisis movements, and counselors in the batterer intervention field. It has been seen by millions of people in North America and across the world.

(with Sut Jhally): Wrestling with Manhood was the first educational program to pay attention to the enormous popularity of professional wrestling among male youth, addressing its relationship to real-life violence and probing the social values that sustain it as a powerful cultural force.

Richly illustrating their analysis with numerous examples, Sut Jhally and Jackson Katz – the award-winning creators of the videos Dreamworlds and Tough Guise, respectively – offered a new way to think about the enduring problems of men’s violence against women and bullying in our schools.

Drawing the connection between professional wrestling and the construction of contemporary masculinity, they showed how so-called “entertainment” is related to homophobia, sexual assault and relationship violence. They further argued that to not engage with wrestling in a serious manner allows cynical promoters of violence and sexism an uncontested role in the process by which boys become “men.”

Designed to engage the wrestling fan as well as the cultural analyst, Wrestling with Manhood continues to provoke spirited debate about some of our most serious social problems.

In its portrayal in popular culture, alcohol offers a release from inhibitions and a path to happiness, wealth, maturity, creativity, athletic success, independence, and sexual freedom.

In reality, the abuse of alcohol diminishes and destroys those very qualities and is linked to 1,400 deaths, 500,000 injuries, and 70,000 sexual assaults among students each year.

Spin the Bottle is the first educational program to step beyond an analysis of “binge drinking” to focus on techniques that alcohol marketers use to link the product to the fragile gender identities of young men and women. It also offers young people concrete strategies to counter the ubiquitous presence of alcohol propaganda and, in so doing, inspires them to take back control of their own lives from the influence of cynical manipulators. 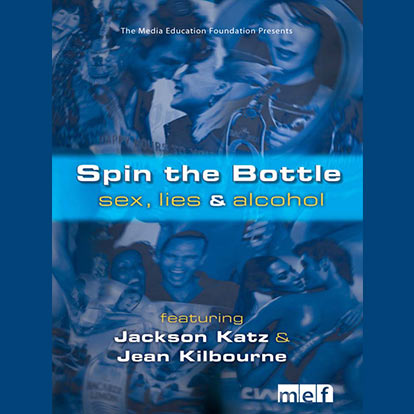 Jackson Katz also appears in many other important and popular documentaries about issues related to gender, sex and violence in media culture.

“He…was exactly what we wanted…I was especially pleased that we were able to present an educational program that actually attracted people who needed to hear the message, rather than the more typical ‘preaching to the converted’.